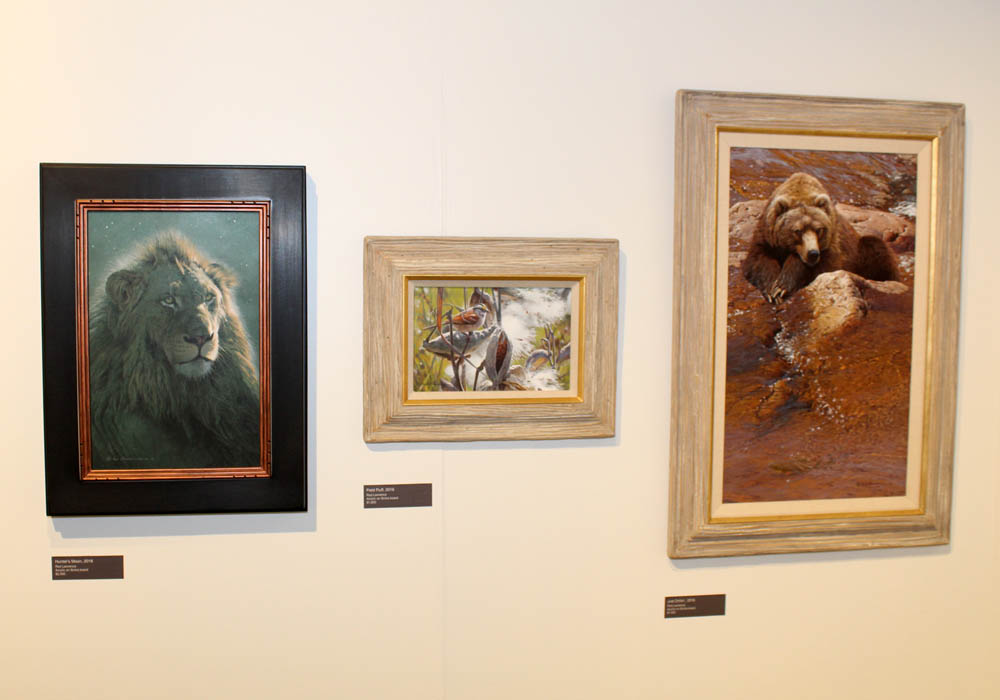 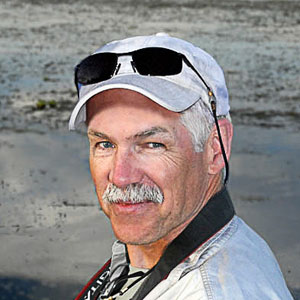 Rod Lawrence graduated with a bachelor of fine arts degree, magna cum laude, from the University of Michigan in 1973. Since then he has been working full-time as a professional artist. His credits include being named the Michigan Ducks Unlimited Artist of the Year in 1979 and the Michigan United Conservation Club’s Michigan Wildlife Artist of the Year in 1981. He has the winning designs for , 1987, 1992 and 1995 Michigan Trout Stamps. He had an unprecedented double win for both the 1995 Michigan Duck Stamp and 1995 Michigan Trout Stamp. His win for , 1990, 1995, 2000, 2002, & 2007 Michigan Duck Stamp makes him the only artist to have won ten Michigan stamp designs. He one of only two to win six Michigan Duck Stamps and one of only two artists to win four Michigan Trout Stamps. He is a signature member of the Society of Animal Artists.
Lawrence has exhibited in many and one-man shows, including the prestigious Leigh Yawkey Woodson Art Museum’s “Birds in Art” and “Wildlife: The artist’s View” shows. His art has appeared as covers, illustrations features in many outdoor magazines. Three sets of collector plates also feature his work. He is an active instructor for artists’ workshops. Lawrence has written and illustrated four instructional books: “Painting Wildlife Textures” 1997 North Light Books (also released in a Chinese edition), “Painting Basics – Waterfowl & Wading Birds” 2000 North Light Books, and he co-authored “Wildlife” Walter Foster Publishing 2004. A revised version of this book authored entirely by Lawrence and featuring only his work titled “Animals” was released in 2009. His book “Painting Wildlife Textures” was updated and re-released as a “classic” by the publisher, North Light Books in 2011.
A log cabin in the hardwoods of northern Michigan, overlooking the North Branch of the Manistee River, is home for Lawrence and his family. The symbol preceding his signature in each of his painting shows the importance of his family in his work. The oddly shaped “S” is for his wife Susan (an accomplished basket weaver and instructor), and the “M” and “B” represent their sons, Matthew and Brett. 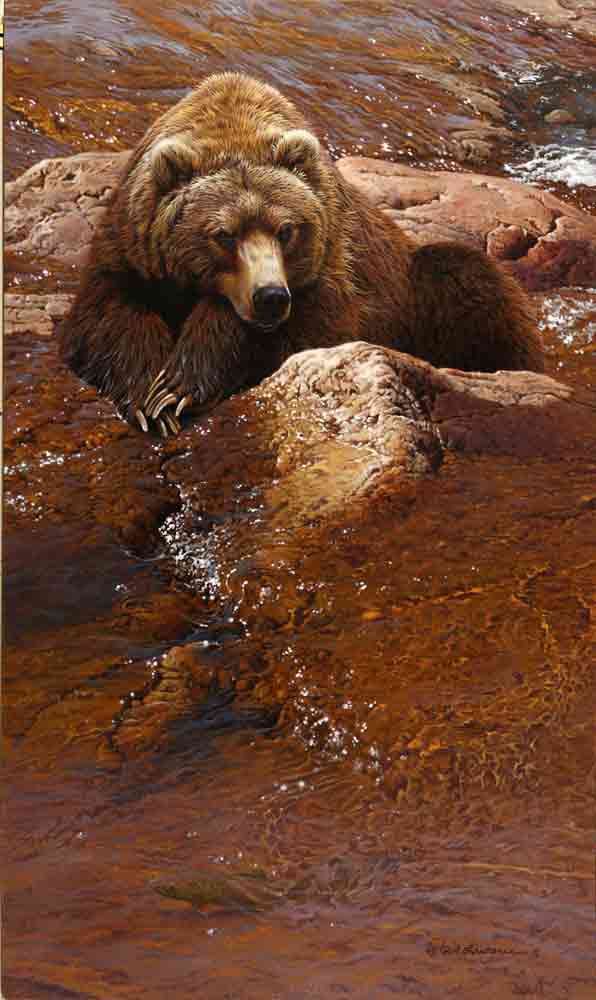 Is it too hot? Maybe it’s just one of those days when you’re too tired to do anything. So if you’re hot and tired, even too tired for fishing, this looks like a good place to plop down between the rocks. Listen to the water bubbling as it cascades around you, softly but incessantly babbling away as it cools and soothes your wild side. Is that lunch swimming by? Not today. Today it’s just a neighbor taking a dip and enjoying the water. Yes, a little warm sparkling sunshine, some soft sounds of nature and a little liquid refreshment on the rocks. It’s a great day for just chillin’. 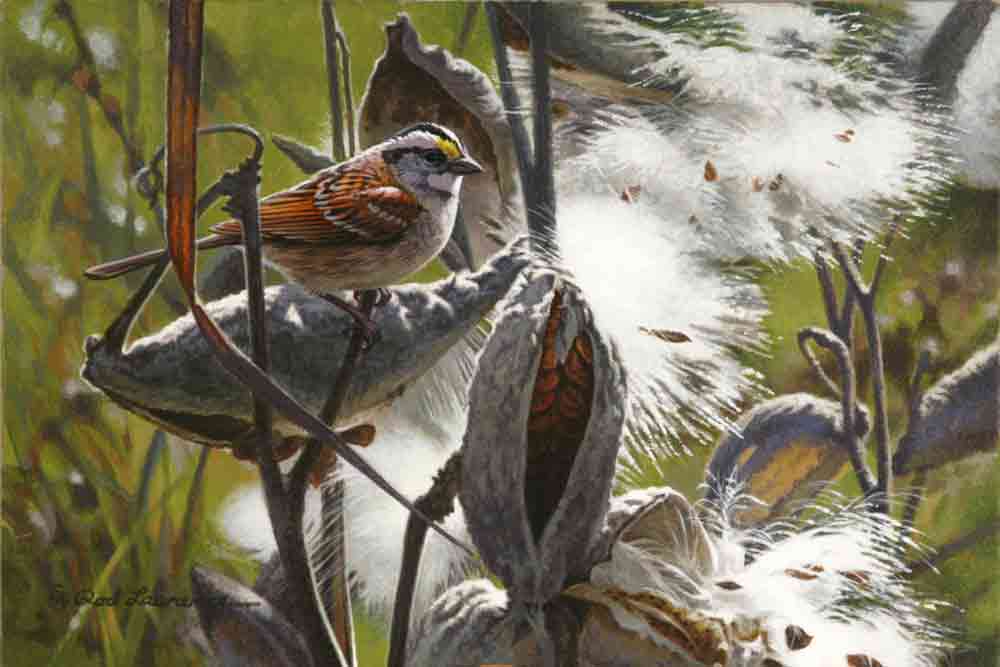 There’s something about milkweed pods opening up to disperse their seeds that appeals to me. Exploding white fluff suspended in the air drifts away like puffs of smoke. I often see various bird species flittering around the pods. Some are just passing through, looking for insects. Others are interested in the milkweed plant itself, using the strong stem fibers for weaving their nests. The white-throated sparrow is among my favorite birds. I see them almost daily outside my studio window. 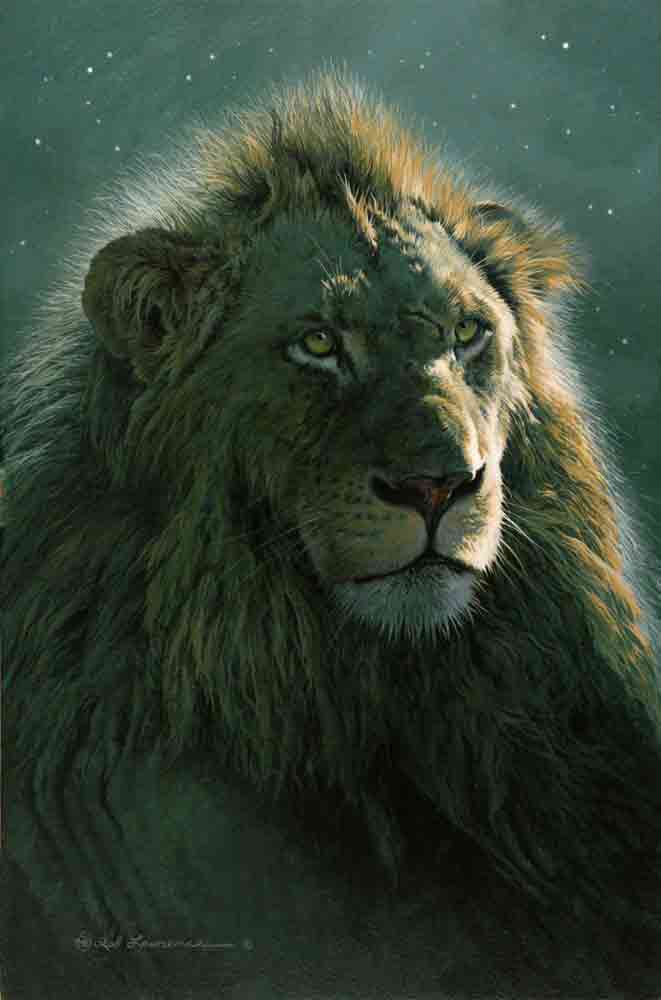 Lions are the only cats that live together in a group. African lions have no natural predators. While the female lions do most of the hunting, the male lions eat first. Male lions will hunt, especially when the group is hunting large prey. Lions are also opportunistic and will hunt and steal when a good opportunity presents itself. Most hunting is done at night, or early morning. A moon lit night offers both predator and prey a better chance to see each other. Under the cover of darkness, a lion probably can make a closer approach than during daylight hours.

The full moon has many names. In the Northern Hemisphere, a hunter’s moon, also known as a sanguine or “blood” moon, is the first full moon after a harvest moon.

For this painting of an African male lion at night, I picture him as hunting, using the moonlight to his advantage. Wherever this lion is, in this the title “Hunter’s Moon” seems very appropriate.