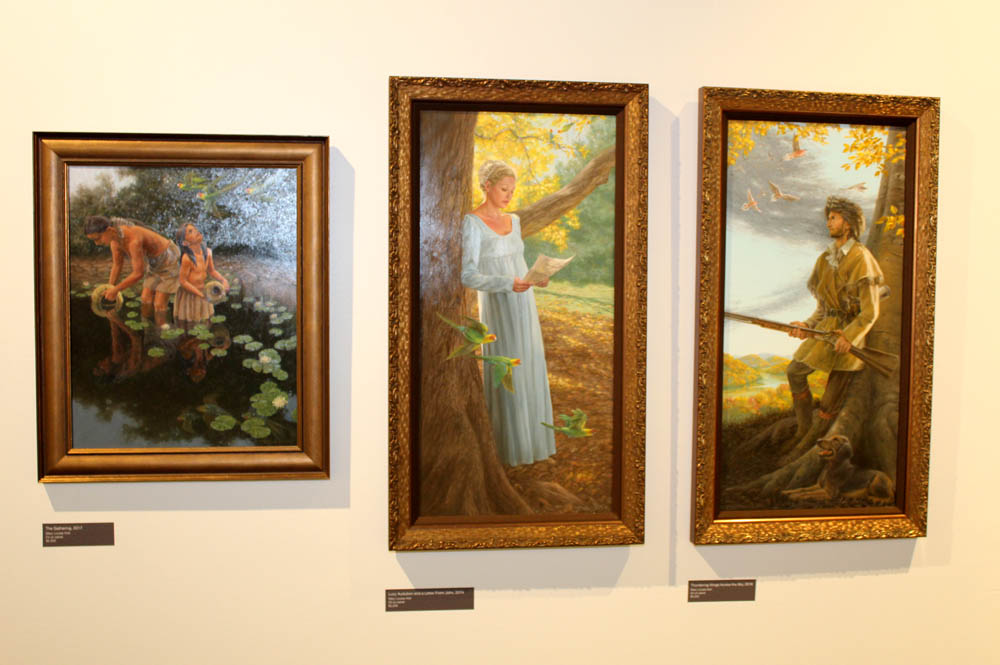 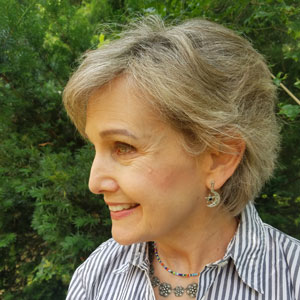 Mary Louise Holt was an honors graduate from the College of Mount Saint Joseph with a Bachelor of Fine Arts degree. She started her career as a graphic designer, illustrator and courtroom artist for local and national television. But a lifelong interest in natural history compelled her to use those same skills to create exhibits for nature centers, museums and other institutions involved in natural history or environmental education. Her exhibits have been displayed throughout the United States and abroad. With formal training in the academic tradition of fine she also paints portraits on commission.

In the past several years she has been creating compelling depictions of the Eastern American Wilderness as it existed before European settlement. The artist’s historical paintings, portraits, and depictions inspired by nature can be found in private and corporate collections throughout the United States. Many of her artworks have also been purchased by the Eastern Shawnee Tribe, the descendants of the Native American people she often depicts.

Mary Louise Holt’s work has been exhibited in national and international art competitions as well as several prestigious museums in the United States and Europe. To learn more about her work you can visit her website at HYPERLINK “ 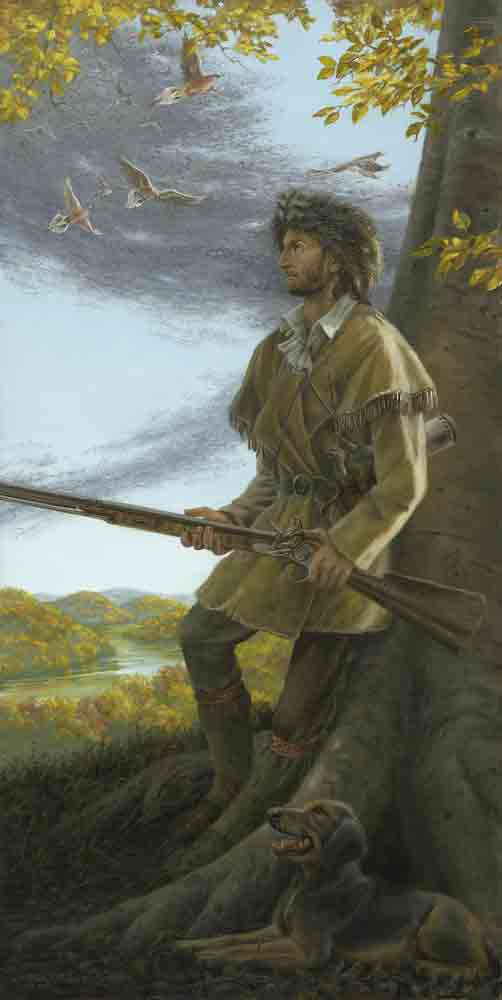 Thundering Wings Across the Sky

In the fall of 1813, somewhere between Henderson and Louisville, Kentucky, John James Audubon encountered a massive flock of passenger pigeons flying overhead. Numbered in the billions, they most certainly were the most abundant avian species on earth. Although it was midday, the flocks were so massive they darkened the sky, reminding Audubon of an eclipse. The next morning the flocks were still passing overhead, their ranks undiminished. I have depicted Audubon with his faithful dog, Dash, who was an excellent retriever of the birds Audubon harvested and used as subjects for his paintings. Audubon once said with amusement that Dash was one of the most important contributors to his great work “The Birds of America.” 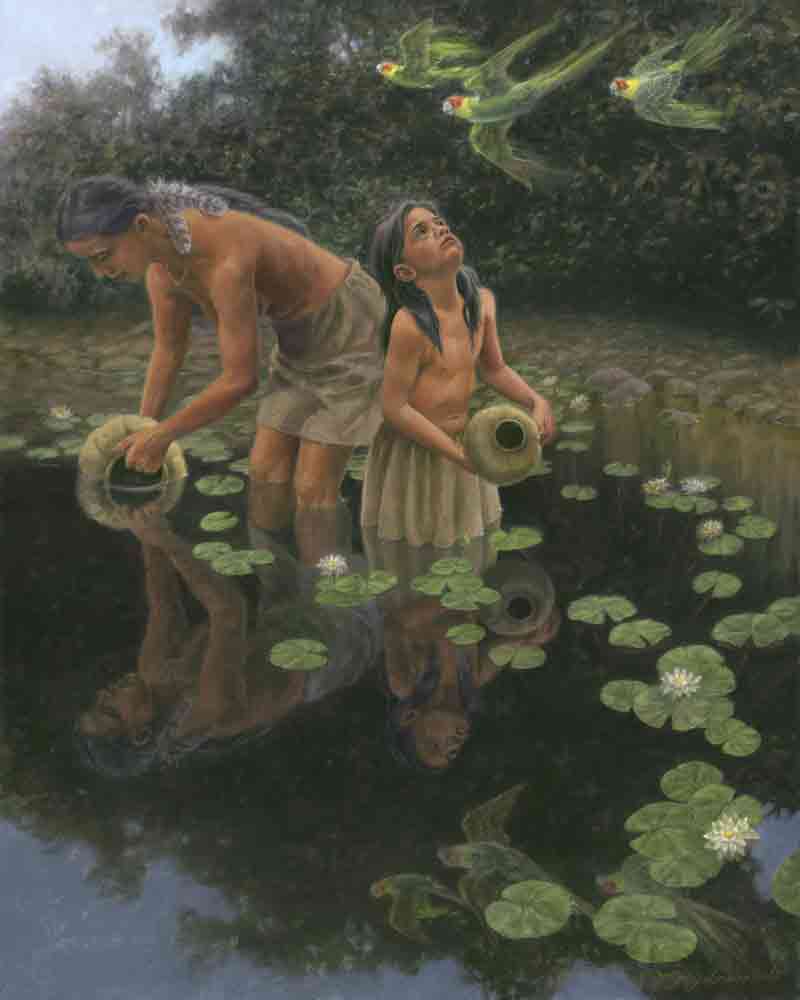 The Fort Ancient people, ancestors of Algonquian speaking American Indians, lived in villages within the Ohio Valley. Everyone in the village, young and old, on one another to survive. Everyone had a job to do and little girls would have often worked alongside their mothers. I have depicted a mother and daughter gathering water from a nearby beaver pond. A flock of noisy, gregarious Carolina parakeets overhead. Their bright, colorful plumage has caught the eye of the little girl. Creatures of the forest, both avian and earthbound, have gathered together for a brief moment in time. 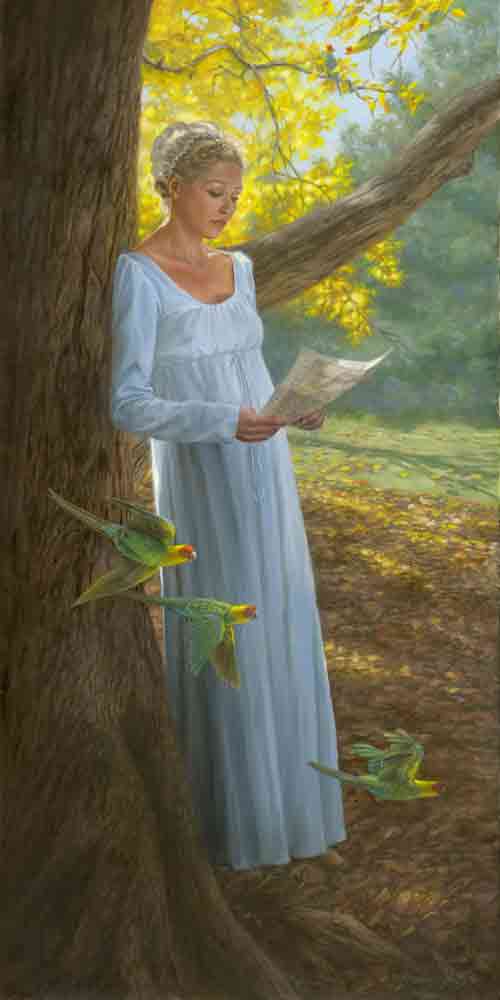 Lucy Audubon and a Letter From John

Lucy Bakewell Audubon (1787-1874) was the wife of John James Audubon the famous ornithologist, naturalist artist. His great life’s work and legacy was the creation of a color plate book entitled “The Birds of America.” Theirs was a love story that endured great hardships and it can be said that, without Lucy’s help and support, John James’ great work may never have been completed. I think she was justified to refer to it as “our great book.” I created this image of Lucy from written descriptions of how she looked a young woman. One time, before they were married, John traveled to France to visit his father. I chose to depict Lucy reading one of his letters. She is surrounded by beautiful Carolina parakeets, the only parakeet native to North America. Although still abundant during Lucy’s lifetime they eventually became extinct in 1918.
Price3200.00 each or 6000.00 for the John and Lucy set.