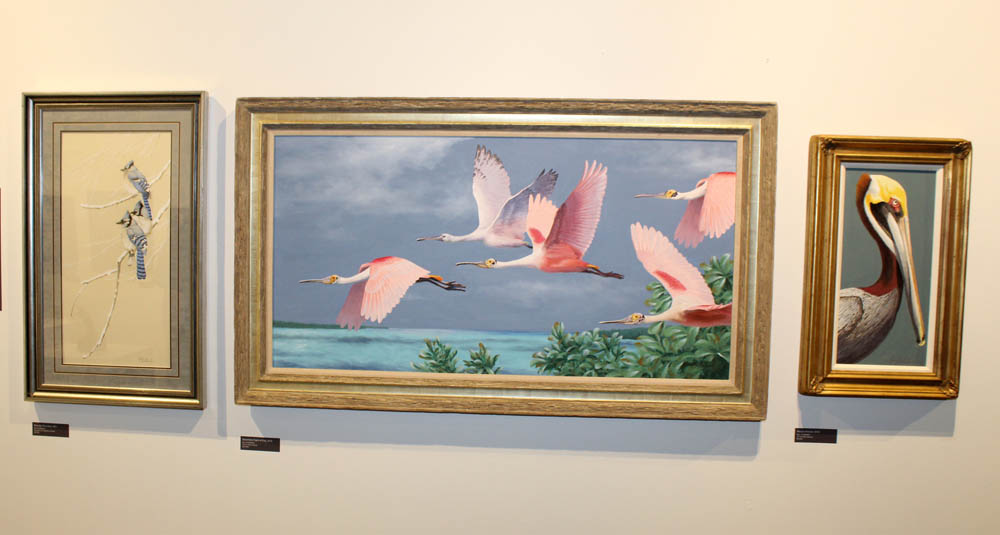 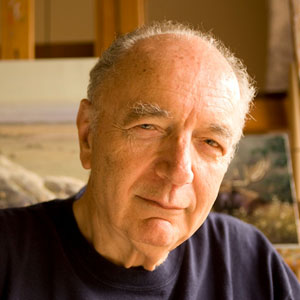 Guy Coheleach’s paintings have been exhibited in America from New York and Los Angeles as well as Peking, London, and Johannesburg. His one-man retrospective toured 41 American museums from 1991 to 2011. The second tour started in Florida February 2018. His work has also been exhibited in the National Collection of Fine Art, the Royal Ontario Museum, the White House, Washington DC’s Corcoran Gallery, the Norton Gallery the Newark Museum.

His paintings have received the Society of Animal Artists Award of Excellence an extraordinary eight times. In 1983 he was awarded the Birds in Art Master Artist Award by the Woodson Art Museum. Visiting Heads of State have received his American Eagle print, and he was the first Western artist to exhibit in Peking after World War II. Coheleach became a charter member of The World Wildlife Fund’s “: A Nature Trust” in 1972. His endowment at the University of Tennessee provides about six full scholarships to the School of Wildlife Management each year. In 2012 he received a Lifetime Achievement Award from the Society of Animal Artists.

Coheleach graduated from Cooper Union and received an Honorary Doctorate from William and Mary. He is the subject of films “AN ARTIST’S JOURNEY IN AFRICA by PBS, “GUY COHELEACH AND THE BALD EAGLE”, “QUEST: AN ARTIST AND HIS PREY”, “THE BIG CATS: THE PAINTINGS OF GUY COHELEACH” by Abrams was a Book of the Month Club selection in 1982.” Other books include “COHELEACH: MASTER OF THE WILD” and “GUY COHELEACH’S ANIMAL ART”. His highly acclaimed book “THE AFRICAN LION AS MAN-EATER” is embellished by over 100 of his paintings and recently published as an electronic version in the iBook format.

My mother probably had a lot more to do with my interest in nature than she ever realized.  As a young I witnessed her love for feeding the birds in our back yard.  Our family favorite was the brash blue jay.  One summer she started leaving the window open where the bird feeder was.  Although it took a while for any of the birds to come close to the open window, the blue jays wanted those peanuts.  In a few she moved the kitchen table to the open window and put the peanuts on the table.  After a few more weeks the jays were flying onto the table to get their peanuts.  At the time, I thought all this as quite ordinary. 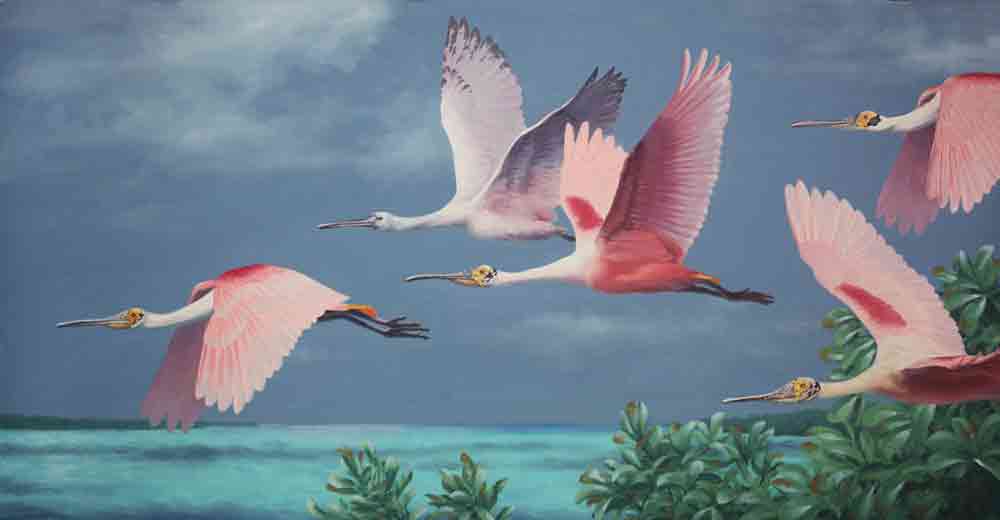 These popular birds are a common sight in the coastal waters of Florida and the Gulf.  This painting shows four adults and a juvenile.  They are preparing for a tropical storm in the mangroves in one of the Florida Keys.  They are a wading bird with a unique flat bill that they swing from side to side feeding on crustaceans, amphibians, fish and aquatic insects.

Pelicans seem to be a leftover from the flying reptiles of the dinosaur era.  But they are a very soothing sight when gliding effortlessly low over the ocean water at our beaches in Florida.  When they come upon a school of fish they rise up and then peel off like dive-bombers after their meal.  Here we have a portrait of an adult bird in breeding plumage.