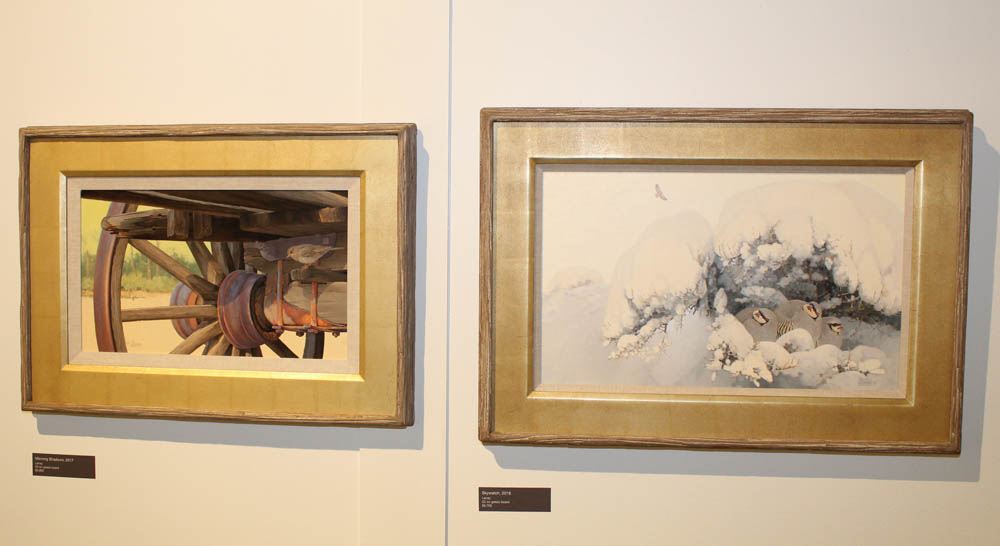 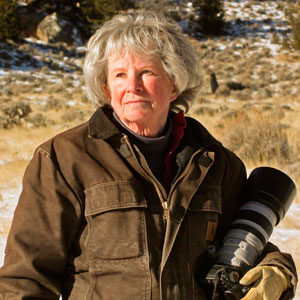 LANEY is a naturalist wildlife artist and photographer. She has spent a lifetime in art, first majoring in commercial art at Denver University. Her first job was in scientific illustration for biology texts published by the National Science Foundation, and the Biological Sciences Curriculum Study, and then as sole artist and illustrator for college texts books published by New York publishing houses.

Moving to Wyoming in 1970, she spent seven years as the Northern Plains Regional Representative for the Sierra Club, covering the states of Wyoming, Montana, North and South Dakota and Nebraska. Returning to fine art, her specific interest is naturalist art, a separate branch of animal and wildlife art. It involves in-depth study of animal behavior and natural habitats, including vegetation and geologic formations, clouds, plants, and water. The paintings encompass a whole story about the animal and its habitat. This art is specifically directed toward involving the viewer in a scientific representation, and story about animals and land and environmental quality.

Originally from Colorado, Laney has been in the Wind River Valley for fifty years and lives on Dry Creek near Crowheart, Wyoming.
She is a founding member of the National Museum of Wildlife Art in Jackson Hole and has exhibited in many shows at the museum, most notably, Darwin’s Legacy in 2013. Her new Bighorn Sheep painting, “Sunrise”, was installed in June of 2018, as the center attraction in the main building at the Wyoming Whiskey Mountain Conservation Camp. She is Signature and Distinguished member of the Society of Animal Artists and a Signature and Master member of the American Women Artists.

In May 2016, her book, To See Beyond Looking, was released. It is a life history of a naturalist artist.
Contact information can be seen on her web site, sunnybankstudio.com. 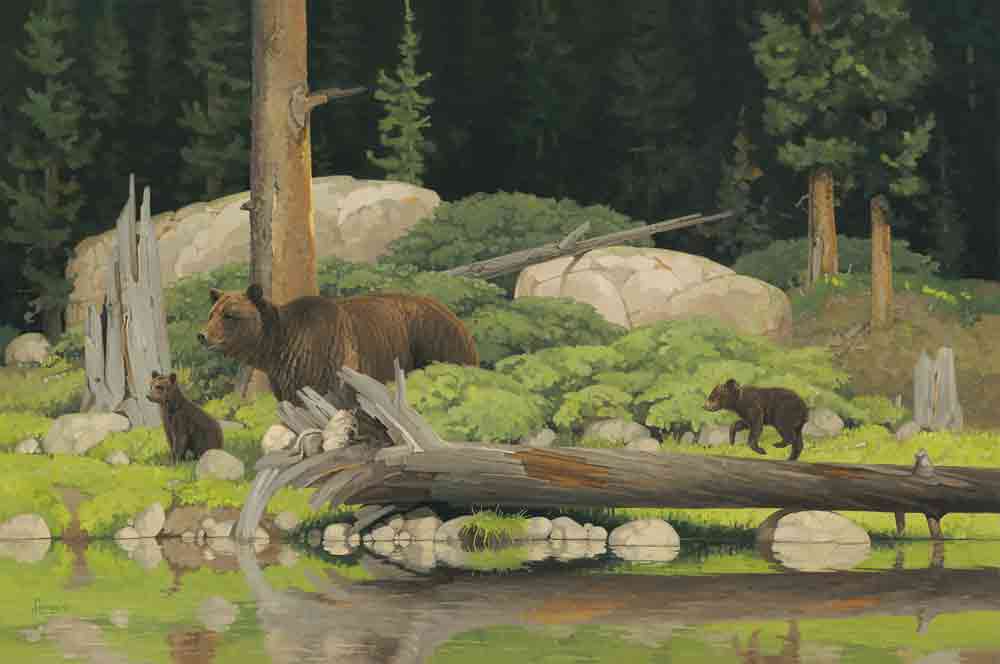 Grizzly sow and cubs. The true spirit of Yellowstone National Park are the grizzly populations. Hundreds of thousands of people make the pilgrimage to the park, primarily to see wildlife in their natural habitat. If they are lucky, they get to see a grizz, and it makes their holiday worth the travel, and something to remember for a life time. This particular bear with her cubs were residents along the Yellowstone River, above the falls. I spent hours watching the family graze and play. Truly, a good life. 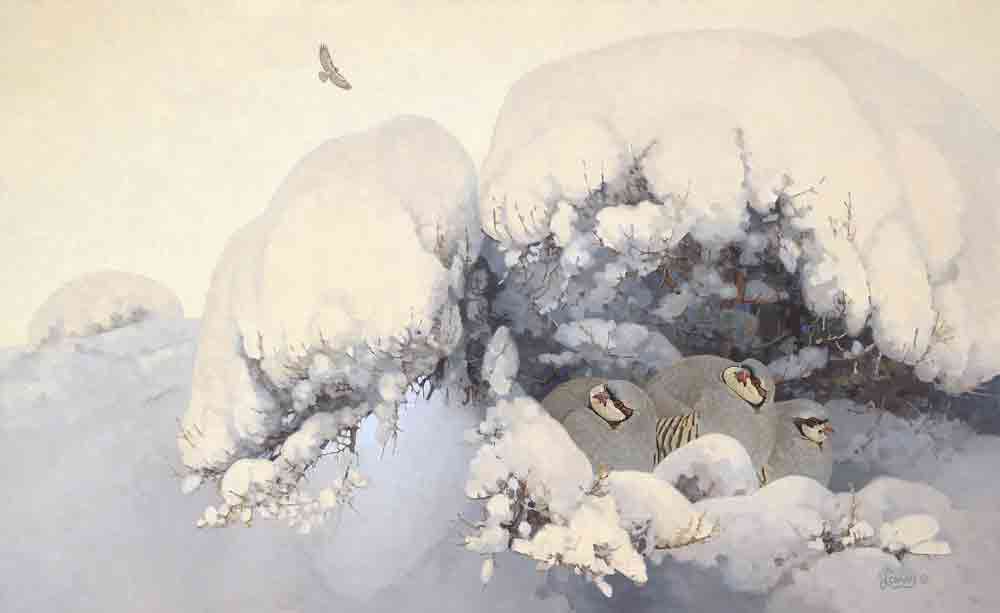 Chukars and Red Tailed Hawk. The high plains are the perfect habitat for Chukars. Introduced from Central Asia, these beautiful birds have done well on the Wyoming prairie and semi arid deserts of Utah and Idaho. After a winter storm, they find sagebrush a convenient cover from the constant threats of large hawks. During the winter months, Chukars usually stay in family groups, and many pairs of eyes, watching the skies, help survival rates. 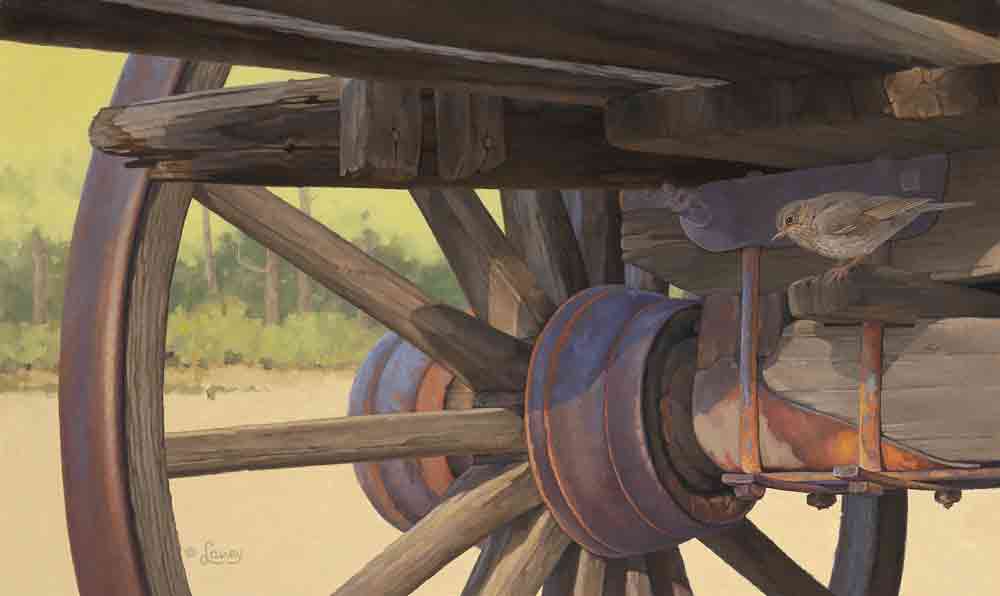 Swainson’s Thrush. In the early morning light, the insects are plentiful in dark and moist corners. Searching under the old sand wagon, a hand me down from my grandfather’s era, she is finding breakfast. This Swainson’s Thrush along with the Hermit Thrush, have one of the most beautiful of songs in the forest.
Price$3800