In 1996, just after moving (jobless) to Tucson, Arizona, from New England, wandering through desert arroyos quickly became a favorite pastime and stress reliever. On one early trek, walking amidst brush, rocks, and unidentified scurrying little critters, I felt a tugging – not on shoe or pant leg, but directly on the heart. I had spied, and fallen under the spell of, the Sacred Datura… and who wouldn’t??? Only later did I learn that, despite its graceful, delicate beauty, every part of this plant, including root, is extremely toxic, even deadly. In times past, local shamans somehow determined that with careful (yet, not easily defined) handling, its hallucinogenic power could serve as a useful tool. The shaman considered the “spirit” residing within the Sacred Datura an ally and working in conjunction with that force, he could bring about the desired result. I too find myself enchanted by this lovely plant, but am quite content to absorb its magic through my eyes only. The hawkmoth obviously feels otherwise and frequently hovers (hummingbird style), sipping its nectar – apparently without ill effect. Best left to the experts (shaman and hawkmoth), I say… just gazing is enough to alter my state of mind and lift me to a more peaceful place.

In the Spring of 2010, I visited the Norfolk Botanical Gardens to photograph the nesting Bald Eagles. This was during the time the late Winter Camillias were blooming by the millions. I am particulary drawn to the light shining through the soft white petals. The touch of red in the stripes provides just enough bright contrast to keep the painting lively, while the diagonal composition enhances and reinforces the drama of the light.

The early 20th century painter Egon Schiele was the influence for my painting “End of Summer”. While studying Schiele’s work, I came across a series of his sunflowers painted in watercolor. I had a beautiful tall sunflower that I intentionally dried to use as a study – this became the inspiration for my painting. From an artists perspective, I saw this elegant dried flower as it transformed into different abstract shapes and colors. It had the suggestion of movement in the petals and I found negative spaces between the drooping leaves. The petals and leaves were twisted and curled giving the flower characteristics that were not there when it was in full bloom. Despite its dried state, as I worked on the painting, my color choices were inspired by the colors of the sunflower while alive and in bloom. I wanted the viewer of the flower to still experience that part of the sunflower’s original, vibrant beauty. 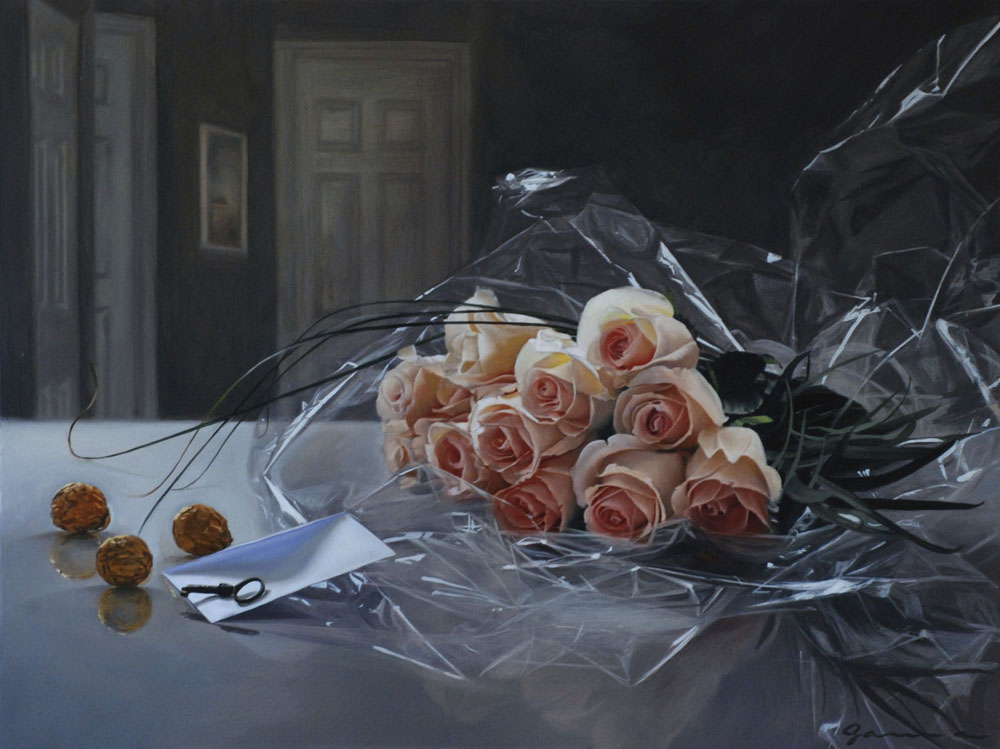 There is always a story behind a dozen roses… These inspired me because of their soft beige-pink color and the transparent paper they were wrapped in. I arranged them as the principal figure and witness of a special event that might have taken place in the composition. The key could open a door… The flowers, chocolates, and letter could open the heart… The observer can give free rein to his imagination and create his own romance! I painted foreground and background with gray values to pull the viewer’s eye onto the colourful bloomed roses. Also, I rearranged the paper in order to surround the flowers with lines and shapes that emphasize their attributes. 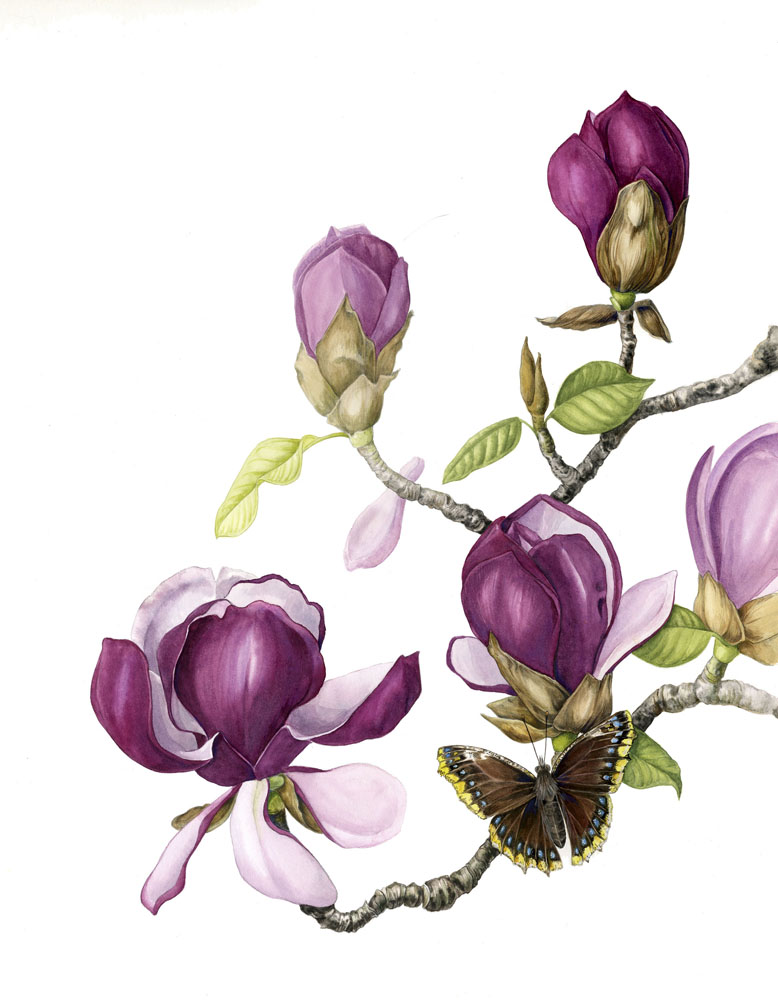 For 40 years I have watched a particular magnolia tree bloom in a neighborhood in my hometown. For me it is the beginning of spring. This magnolia tree is different than all the others. It has a deep plum, purple blossom, rather than the typical pale pink ones. I find the color intoxicating. After 40 years I finally decided to approach the home owner to ask for a cutting from the tree so I could paint it. The same day, a Mourning Cloak butterfly emerged from overwintering in my garage. Winter is a tough time for me as the days are cold and bleak. To celebrate the arrival of spring I painted these two symbols of spring together.