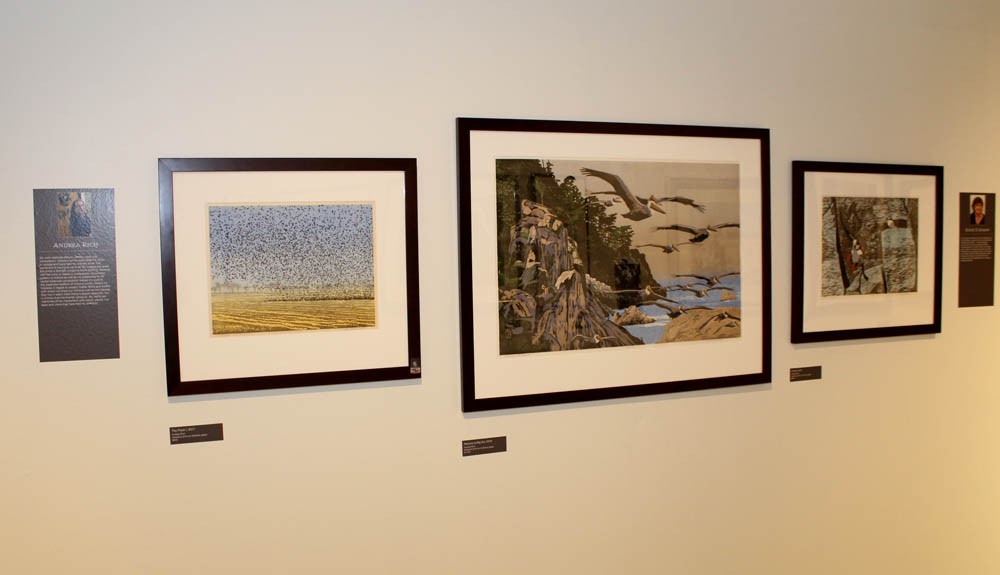 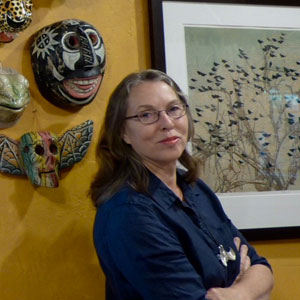 My work explores texture, pattern, color and composition. Woodcut prints captivated me while in college and have held my interest since. The constraint of having to carve all the images first gives the prints a strength unique to block printing. Working with flat color or space in juxtaposition to complex pattern or texture as well as my preference for off center-balanced composition relates my work to the Japanese tradition of Ukiyo-e prints. I follow my interests in regard to subject matter. Birds and wildlife with whom we share our world as well as the habitats they live in seem most fitting subjects especially now in a time of environmental upheaval. My works are memories of my interactions with nature, places I’ve been and views that have held my attention.
Andrea Rich  www.andrearich.com 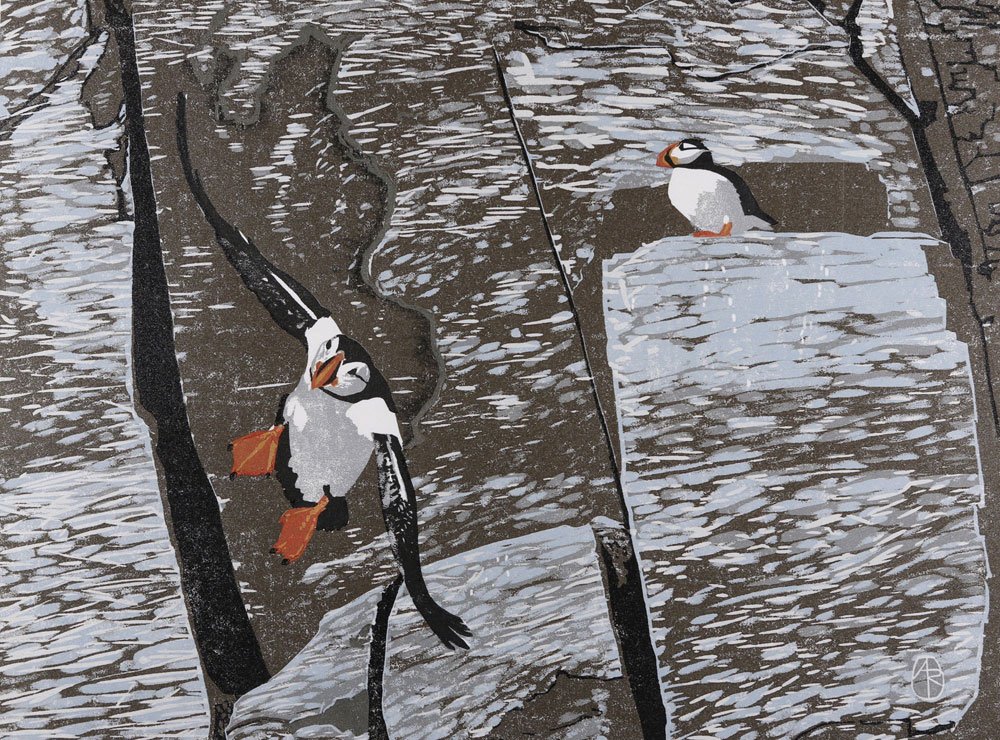 Last year I was able to travel to the North Pole to experience a habitat that is extremely endangered by climate change.  I was hoping to see Polar Bear in the wild which I was fortunate to do.  My second most desired target species was the Atlantic Puffins. We traveled on a small ship north from Svalsbard and would catch flashes of the puffins fishing as they flew past the sides of the ship.  It was a flash here and a spotting there.  Nothing close enough or long enough to get a good look at them.  I had had a similar experience in Alaska where I visited a nesting colony on an off shore island.  I would see them flying in from the sea with their bills full of fish only to watch them dive into their burrows on shore.  A glimpse and them and then out of site.

This time I got lucky.  Near the end of our trip we came to an island where there was a small colony of Atlantic Puffins nesting on a shear rock cliff.  The rock face was not amenable to burrows but the Puffins were making do with cracks and fissures in the rock to rear their young.  Not only was I able to observe them on the rock face but the puffins, no doubt relaxing after bringing home fish, were peacefully bobbing in the waves around the base of the cliff.  As we approached in our zodiacs the birds showed themselves to be quite curious and came right to the sides of the boat to have a good look at us. 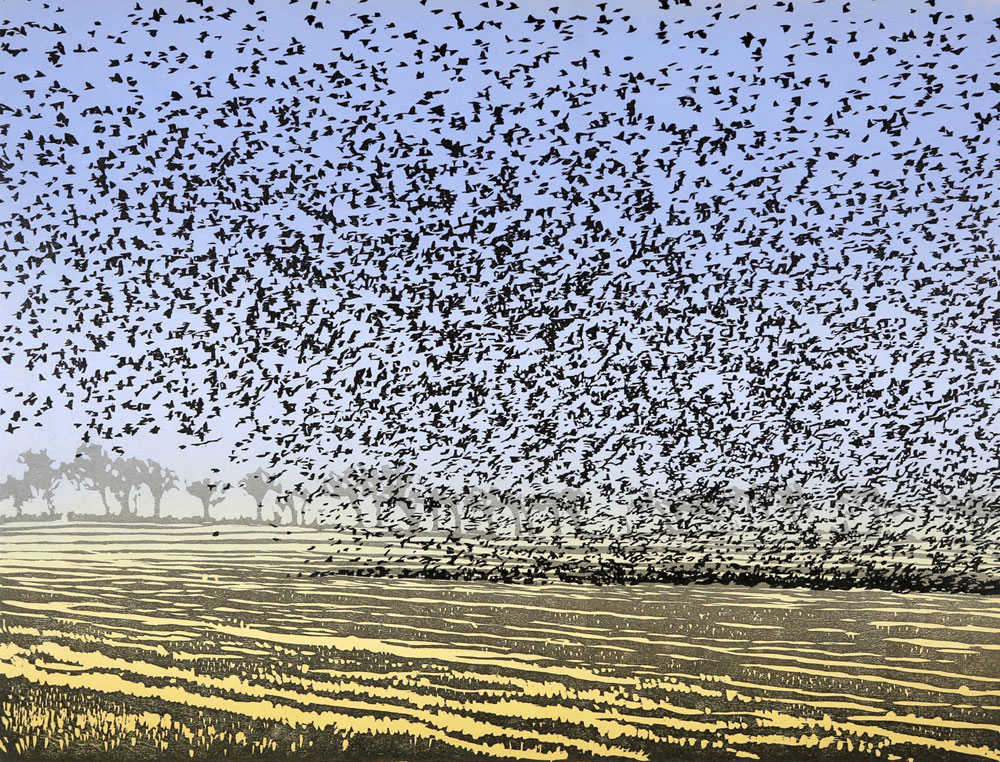 For several years now I have noticed that my color palette has become softer and more subtle.  I am noticing how well camouflaged wildlife is within its patterned habitat.  One cool foggy morning I spotted this Hawk roosting near a lake in central California.  It is a quiet setting with only the dried leaves echoing the reddish hews of the hawk as it waits for the sun to lift the mist. 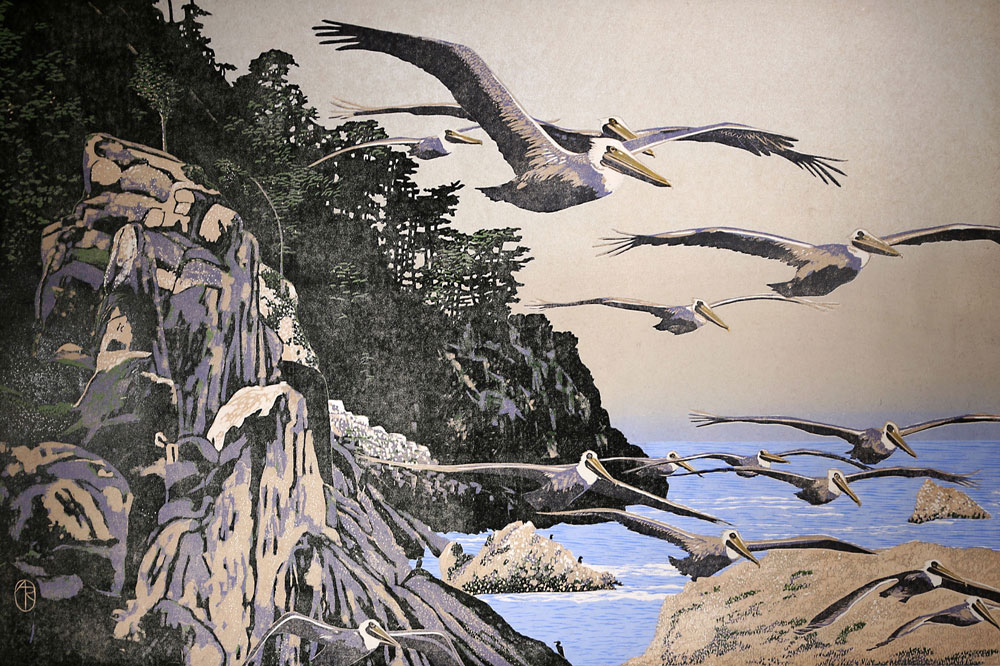 I live on the Montery Bay.  The North end of the Bay is Santa Cruz, my home, while the South of the Bay is Carmel and the Northern end of the Big Sur Coast.  It is a wonderful location for a wildlife artist.  The sea harbors whales, seals, sea otters and a rich variety of seabirds.  Brown Pelicans are year round inhabitants here.  Watching them soaring along the cliffs and surfing the crest of waves never fails to get me speculating on how it must have looked when pterodactyls were the biggest wings in the sky.  There is something so prehistoric feeling about Pelicans.  When they fly they are compact and graceful.  They are exciting to watch as they dive from the sky into the waves for fish.  Yet on land they appear awkward and unlikely.  It was not many years ago that Brown Pelicans were in serious decline as a result of DDT use. With DDT discontinued the pelicans as well as all the raptors have been enjoying a resurgence.  Long may they fly!