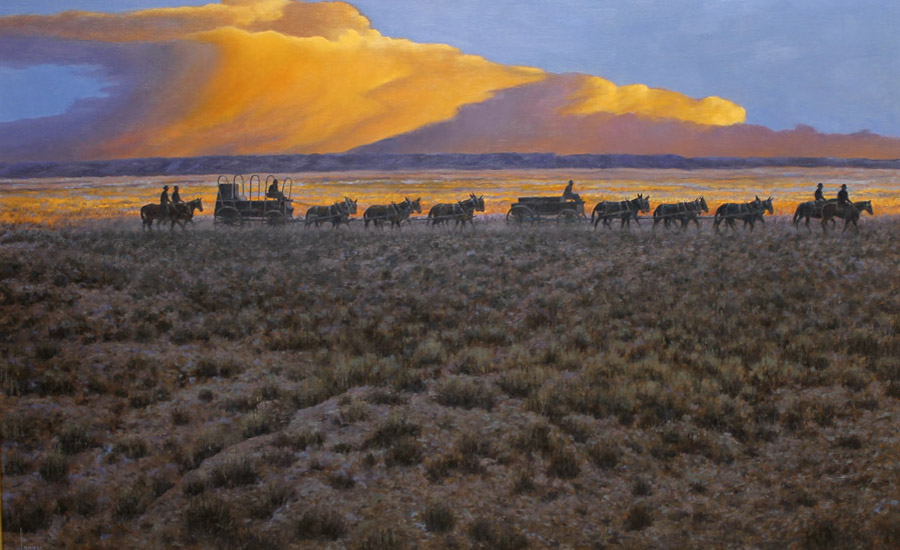 A Promise Made, a Promise Kept

The Trail Begins across Texas –

Western / Cowboy artist, Lee Cable, has created a masterful fine art exhibition focused on the life & times of Texas legend, Charles Goodnight. Goodnight and his partner, Oliver Loving, revolutionized the entire cattle industry in the 1800’s. And this opening painting of Lee Cable’s masterful art exhibition… The Life & Times of Charles Goodnight… depicts a promise Goodnight had made to his friend and business partner. Oliver Loving died of complications from wounds he sustained during a confrontation with Comanches. But before he died, Goodnight promised Loving that he would take his body back to Texas.

So in February 1868, Goodnight returned to Fort Sumner New Mexico, where he had Oliver Loving’s body exhumed so that he could return it to Weatherford Texas.

Goodnight then made arrangements for a custom container to be constructed. It was made from discarded oil cans that were then soldered together. Oliver’s casket was placed inside and surrounded with powdered charcoal. The tin container was then crated in lumber. Loving’s son, William, joined the funeral mule team cavalcade as Goodnight fulfilled the promise he had made to his lifelong friend, returning his body so that it could be buried back in Texas.

Artist, Lee Cable, discussing this painting commented… “Placement and mass of the funeral mule team cavalcade were critical.  I wanted it to portray the emotion and sadness they must have felt as they made their way across the vast expanse of the American West. Too much detail would have defeated the feeling. I wanted the viewer to feel the illusion of movement of the mule team so I moved the procession to the right. There was a foreground Yucca early in the development of the composition. But I removed it because it seemed to weaken the illusion of movement and distracted from the convoy. The last light of day with the big sky evening sunset was chosen to echo the feeling of the end of a day and a life. The foreground was designed to help bring the viewer back to the procession.

The Life & Times of Charles Goodnight opens at the Bryan Museum in Galveston, Texas, and runs from June 21st – October 22nd.

Read More about Charles Goodnight and this fabulous exhibition.